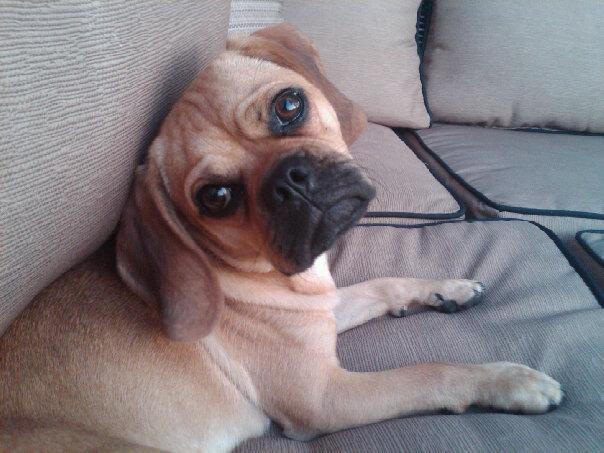 Licking everything and everyone, especially the futon, Big Brother Bruno, Chasing Gotti, food, treats, his toys (when he can play with them by himself), toys that squeek, following his mom and dad, sleeping under the covers, sleeping on the pillow, Going to the dog beach and frolicking in the water trying to get Bruno to chase him. Screeching at the top of his lungs when he sees people that he loves.

When Bruno takes his toy, being left alone, when Bruno beats him up, not sleeping under anything.

Anything you give him!

Walking with Bruno and trying to be in front the whole time.

Bruno needed a baby brother so we searched far and wide on the internet until Danny found the perfect Puggle. We drove 3 hours in the rain one cold Saturday in January to pick him up from the breeder. We were so excited to get him! The lady handed him to us and he smelled like a cow and his fur was all rough from living in a barn!. He sat in my lap the whole way home. Bruno was very sad.

Hankston was born on November 9th, 2009. His dad was a pug and his mom was a beagle. We adopted him from Critter Haven Kennel in Oskosh Wisconsin on January 23rd, 2010. Hankston was, and still is a pee body. He is just now (after 9 months) grasping the concept the he needs to go outside to pee!. Hankston occasionally will pee while he is sleeping!. Hankston has the beagle howl and doesn't bark as much as Bruno. He resides with his parents, brothers, Bruno and Gotti in a house with a big yard in Chicago. Hankston is a very spoiled puppy.