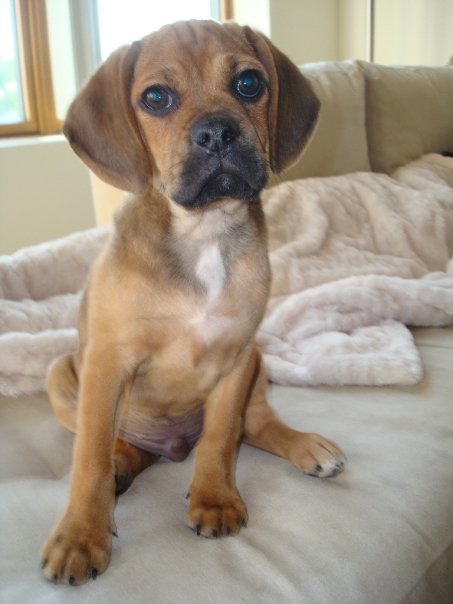 Likes: Sleeping in-between his mom and dad and taking up more than half the bed, chasing Gotti (the cat), growling with toys in his mouth, running in circles when people come over, Greenies, carrots, dog treats, eating anything on the floor, going to the dog beach, laying on his momma's lap, socks, shoes, underwear, waiting by the dryer and catching what falls and then running away with it, barking at work so everyone gets mad at him, using his potty patch on the porch, farting in bed.

Pet-Peeves: When gotti gets attention, when he is sleeping on the couch and we come and lay on him, getting his nails cut, being left alone.

Favorite toy: Our cat Gotti :-), his brother Hank, any blanket or towel, his kong and football, a red squeaky thing that we don't let him play with because it's too annoying to listen to, His white plastic bone, all his toys are his favorite.

Favorite food: Anything that he can find on the floor that he's not supposed to eat - Carrots and apples, Gotti's greenies, anything inside his kong, weepuls,

Favorite Walk: Long walks with his momma at night and going to the dog beach

Arrival Story: We wanted a puggle named Bruno for about a month. After a long search online, we decided to go look at this pet store named, Let's Pet on Ashland in Chicago. We walked in and saw the most adorable puggle in the back. He was all by himself in a cage and had the saddest look on his face. It was love at first sight. We left the store and went to have lunch to think it over. Within 30 minutes we were back in the pet store handing over the credit card to pay for our new baby puggle named Bruno. He has been the center of our lives ever since.

Bio: Bruno was born in Wisconsin on February 4th, 2009. His dad was a pug and his mom was a beagle. He was taken to a pet store at about 11 weeks and we rescued him from his cage on May 5th, 2009. He is a very happy-go-lucky puggle with a ton of energy and love. He shows all of the positive traits from both his pug dad and beagle mom. He has a very loud, deep bark, so if you don't know what he looks like, you would think he is a very big dog!! He resides with his adoptive parents in a loft in Chicago. He gets more attention and love than he asks for and is always happy!.

Motto: "Just give me a carrot and a pair of underwear and I'll be a happy man."